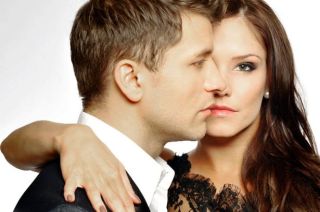 Famous from the BBC 1 show Strictly Come Dancing Pasha Kovalev & Katya Virshilas are touring the UK again with more dates and a longer show, performing on
Wednesday night in St Davids Hall, Cardiff.  Having been dancing since they were children they quickly became Champions in their respective fields before it was Strictly Come Dancing in 2011 that brought them together in the UK .  Joining them on the tour are Ryan Hammond and Lindsey Muckle who have recently appeared on Got to Dance.
From the opening few numbers which included 2 Cha-Cha-Cha numbers, one from each of the couples, you could tell it was going to be a night to enjoy.  The set while elegant and simple didn’t detract for the dancers and the lighting transformed it blending in beautifully with each dance.
The first act ended with a passionate Tango from Chicago performed by the whole company leaving the audience excited about the second half.
Mike Newman was the perfect host, keeping the interaction with the audience light and humorous all night as there was plenty of opportunities for audience participation through the whole show including a very revealing Q&A section where you felt like you were getting to know the performers.
Highlights from the second act included the opening Dirty Dancing sequence and a gorgeous Viennese Waltz to A Thousand Years, from Twilight.  I really enjoyed the Jive to Footloose from are Ryan Hammond and Lindsey Muckle.  There was only one disappointing part of the show and that was that we only had one dance where Pasha was shirtless, the Pasodoble where he displayed his stunning cape skills.

View all posts by purplecftr