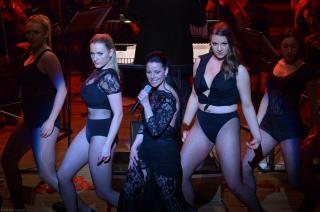 After a sell out concert in April 2012 and part of the nationally acclaimed tour An Evening of Movies and Musicals returned to St David’s Hall on Saturday Night.
With a slow start the highlights from the first half included the Siren Sisters performing Sisters and Swinging Rascals performing Hello Dolly. Peter Karrie also showed why he is a Welsh favourite with an outstanding version of Papa can you Hear me.
A last minute stand-in Jamie Owen was the perfect Host but he was under used and it would have been more interesting to learn more information about the performers and why they had chosen to perform the particular songs they were performing on the night.
The second half moved much quicker beginning once more with outstanding early performances from the Siren Sisters and Swinging Rascals.  They were quickly followed by the very talented Bridgend and Vale Stagecoach group performing Suddenly, Seymour from Little Shop of Horrors.  Peter Karrie wowed once again with This is the Moment from Jekyll & Hyde.
A surprise highlight of the evening was Nathan James one of the contestants from last year’s ITV show Superstar, he received a standing evation for his performance of Gethsemane from Jesus Christ Superstar.
The show also included outstanding performances from John Owen Jones (whose joy to be on stage was catching) and Ruthie Henshall (especially performing All That Jazz) the evening was a resounding success.
DISCLAIMER: While I am not paid for the review I do get the product/tickets for free

View all posts by purplecftr